NORMANDY 2019 - THE VOICES OF FREEDOM

Welcome to Normandy, land of Peace and Freedom.

On 6 June, 1944, Allied forces land on the Normandy beaches. Simultaneously, airborne troupes are dropped above Sainte-Mer-Eglise. On that day, this village becomes the starting point of the Freedom Trail along which the Allied forces and the civilian population alike will pay a heavy tribute to the liberation of the European continent. In August 1944, Paris is in turns liberated.

The D-Day landing will forever remain in the minds and memories of every Norman as the symbol of sacrifice paid for peace, fraternity among peoples and reconquered freedom.

In June 2019, the date the Normandy International Choir Festival in Yvetot is scheduled to take place will coincide with the 75thanniversary celebrations of these historical events in France. Following the 1st edition of our festival in 2017, “Europe of my Dreams”, our 2nd edition will resonate with the voices of young choristers from all over the world about a precious and hard-won value: Freedom.

Our festival is open to all, we wish these three days to be an opportunity for young people from the four corners of the world to share a common passion for choir singing and more …

As the inheritors of this 75 year-old legacy, we are convinced it is our duty to train youth to understand what it is to be a citizen, to be open to others and be tolerant.

We hope to contribute to these values through concerts co-performed by choirs from Normandy and elsewhere as well as joyful festivities and a competition judged by demanding yet gracious jurys with international reputations.

As a ticket-holder, you will have access to all the concerts as well as workshops organized by visiting choir masters to discover world music. Several gala concerts will also take place to share this exceptional musical experience.

We hope to welcome you to the 2nd edition of the Normandy International Choir Festival – Yvetot, June 8 and 9, 2019

Detailed schedule in the making

20.30: Opening concert by the Youth Choir of “la Maîtrise de Seine Maritime”, at the church in Yvetot

17.30 :  Parade through Yvetot of the participants

19.30 : Closing concert by the French Army Choir at Yvetot Church

“ The French Army Choir was created in 1982 at the instigation of Charles Hernu, the Defence minister at the time. As a special formation of The Garde Nationale, it is the official choir of the Republic and represents one of the jewels of army culture. This unique ensemble of professional soldiers is composed of 40 singers recruited among French army’s elite and lead by lieutenant-colonel Aurore Tillac, recipient of the prestigious award, with honours, for best Gregorian choir conducting at CNSM, Paris. Following the example of its fellow orchestra, the Garde Nationale Orchestra, the French Army Choir performs both in France and abroad for official ceremonies and galas as well as musical events and festivals.  Its repertoire rages from traditional and popular songs to great lyrical pieces composed for male voices”. 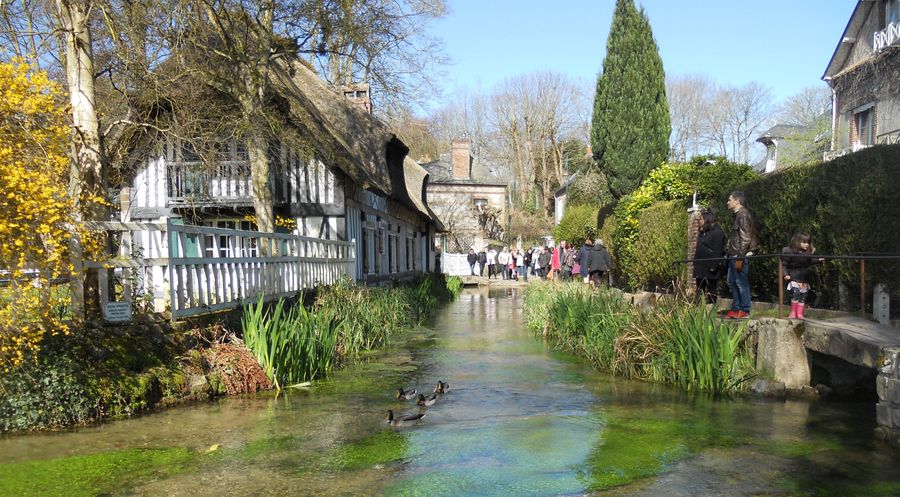 “During the German invasion in 1940, the church, dating from the 18th century, is seriously damaged by bombs and is later destroyed.

In 1949, among several proposals, the most unique and daring by the architect Yves Marchand, is chosen. A circular nave, 40 meters in diameters and 20 meters high characterizes this church as a special landmark in the local landscape. After 6 years of construction, the church is consecrated on October 27, 1956. Its impressive tinted glass windows by the glass artist Max Ingrand (1908-1969) are its most striking features. They are among the biggest in Europe with a 1046m2 surface area, thus creating a unique atmosphere.”

Venue to the 30mn concerts by each of the competing choirs of the festival.

The origins of the Lycée Corneille chapel, now the property of the Région Normandie, are linked to the history of the Jesuites and their presence in Rouen. Marie de’ Medici lays the first stone of the church in 1615. Still under construction, it is opened for mass in 1631. In 1704, it is consecrated under St Louis to become an agricultural warehouse during the French revolution and the first Arts museum in Rouen. In 1895, it is almost destroyed to leave room for extension plans for the school. It is classified as historical monument in 1910. In 1942, two bombs cause extensive damage and in the 1960ies, restoration efforts follow more or less consistently, lasting up until 2012 and 2013, finally restoring the Corneille Chapel to its former glory.

The acoustic qualities of the venue are reinforced by a series of subtle but effective devices, the main one a sphere, 7 meters in diameter, suspended above the crossing transept. Venue to the competition concerts of the Normandy International Choir Festival in 2019.

At the heart of the Pays de Caux, Les Vikings is a concert and conference hall, run by the city hall. 900 seats strong, it is located next to the communal Music School.

Romantic theater, open to the sea, Etretat has inspired the greatest impressionist painters.The cliffs, so famous and unique,Manneporte, Courtine or l'Aiguille are a source of awe. Lulled by the ebb and flow, the grey pebbled coastline contrasts sharply with the bright cliffs, reflecting the changing seasonal colours. This world-famous landscape will be venue to one of the concerts by the competing choirs of the festival.

Veules les Roses is one of the most beautiful villages in France. It combines over the length of the 1 149m river Veules all the charms of the countryside and the coast line. The water chants in the mills, thatched cottages mix with typical Anglo Norman Villas of the last century and traditional fishermen’s homes. St Martins Church, an edifice of three naves dating from the end of the fifteenth century, will host one of the non – competition concerts during our festival.

This is a small village on the cliffs of the Côte d’Albâtre, It has exceptional views over the bay of Dieppe, and has numerous treasures to discover. The valleys; the sea, and an exceptional French garden by Gertrude Jekyll offer a lifestyle that is at the same time intimate and open to the world.

Varengeville has also welcomed many artists; Prévert, Proust, Rave, and Satie have found inspiration here. Renoir, Monet, and Braque also visited and painted here. The concert (not competitive) will take place in the small church, subject of a painting by Monet; with stained glass by Braque, and Braques’ resting place.